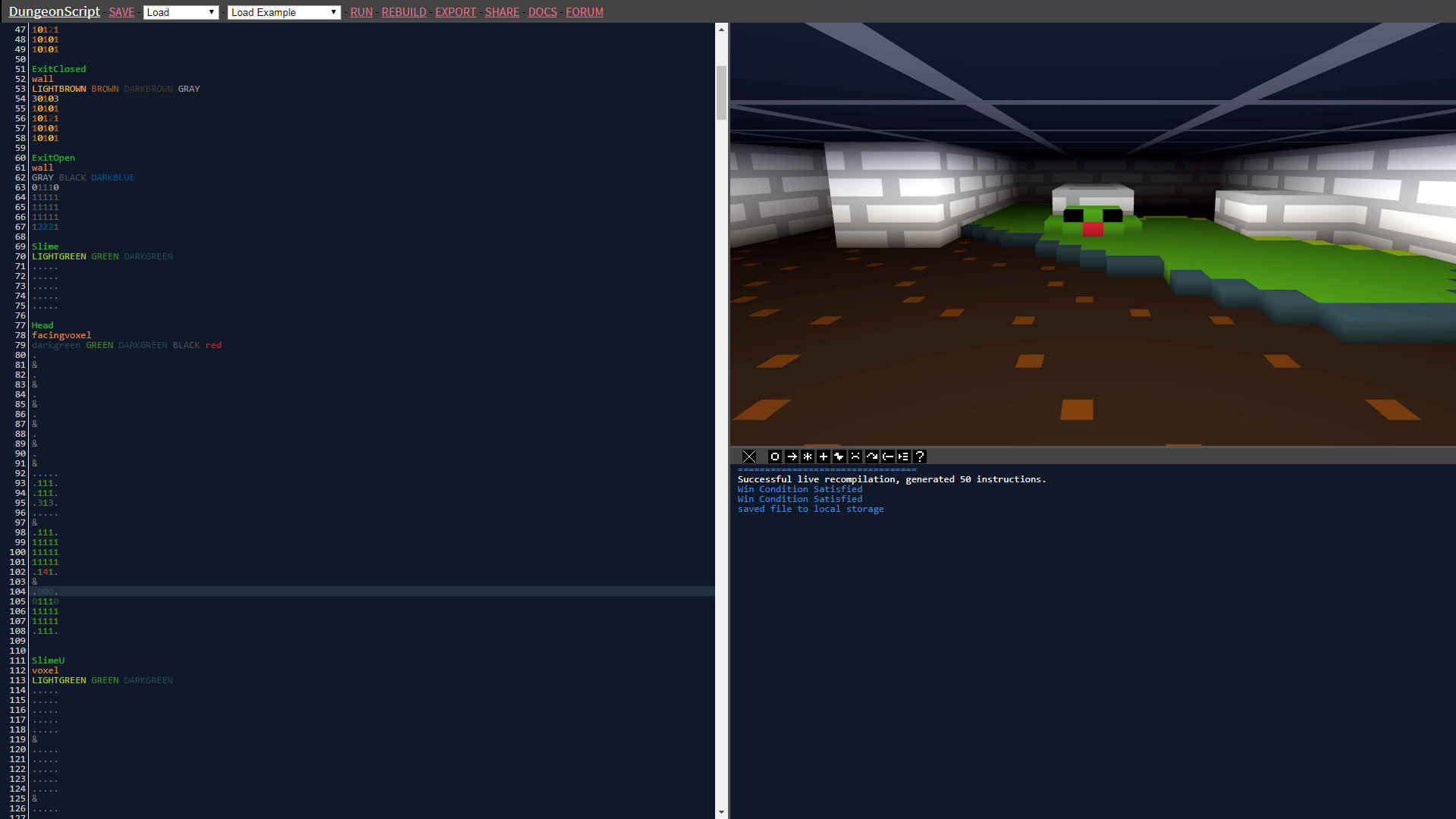 So here’s a thing. A thing called DungeonScript, which you can find right here. You can use it to make games, or play games, like this new 3D edition of Dungeon Janitor. Go! Enjoy!

The other day Blue Manchu’s Jon mentioned he wouldn’t know where to start designing a Dungeon Master style game. That got me wondering how I’d start designing a Dungeon Master style game, and what tools I’d use. Immediately I thought of increpare’s very wonderful PuzzleScript, which is great for turn and grid based puzzle game development, but, like, in first person. That’d be really cool, I thought. If only PuzzleScript would draw in first person.

So that’s what DungeonScript is. It’s PuzzleScript in first person.

What’s most wonderful about PuzzleScript, and therefore also DungeonScript, is that you can build and share an entire game using just the editor webpage screenshotted above. Everything from the art to the audio to the game logic sits in one simple text file, and there’s a share button right there on the screen. Some fantastic games have come out of PuzzleScript, and I’m hoping people will use DungeonScript to create crazy new worlds for us to explore.

PS: Here’s a link to the DungeonScript source, in case you’re into that sort of thing. You won’t need this if you’re just making games with it though.

PPS: If you grabbed the source just after I posted this you might want to try again to get version 1.1. 1.0 didn’t work in firefox or safari. Erp.

PPPS: If you grabbed the source before version 1.2 you might want to try again – I just fixed a bug with checkpoints (October 2017).

So… here’s something new.

While working on something totally unrelated* I saw how much wing shapes opened up spaceship design, and I thought damn, I wish I’d known that when I built Captain Forever. Then I remembered that I’m still building Captain Forever, in so much as I’m rebuilding it anyway. So I added space wings! Of course, space wings make no sense and decorative modules would starkly oppose the CF design, so… they’re shields. Which totally works. Think of them as ablative shielding for re-entry, serving double duty as laser fire absorbers. They’re lightweight and can take a lot of damage, but you can’t anchor other modules to them so they don’t replace girders. I think they’re pretty neat!

After adding the shielding I saw opportunities to revamp or completely redesign other modules, so I’ve been sweeping through the module list doing exactly that. You can see here that I subconsciously copied the rounded girder shape from Remix, for example. Sorry about that Dean & Brian! Most modules have simply been tweaked to add variety of line intensity, which adds a surprising amount of texture to the screen. A handful of others either looked weird in the new renderer (eg bubble shields) or have always looked a bit terrible in my eyes (eg torpedo launchers), so they’ve been redesigned completely. I’m super happy with the results. It’s weird, but 7 years on CF is finally starting to look like it did in my head back when I started building it.

* Or maybe it’s not unrelated. Either way, it’s a surprise :) 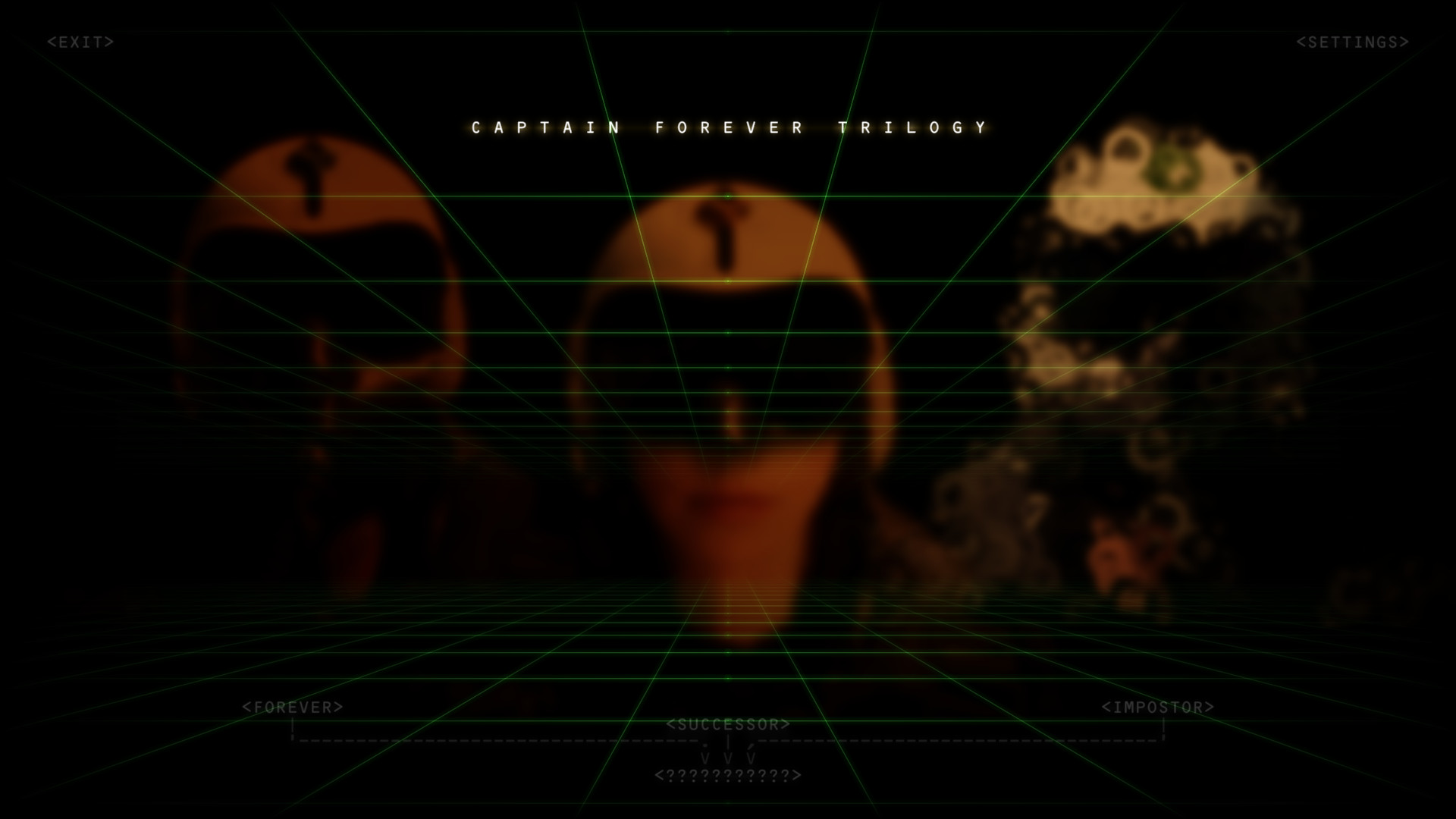 I’m working on a thing! It’s a Captain Forever thing! The Dawn Star was unwell, with the renderer failing on many machines, the design disappearing into the wilderness, and a secret new Blue Manchu project dominating my schedule. I decided to scale my CF ambitions down to something I could finish, and now it’s done! Almost. It’s 90% done, and I’m working hard on the other 90%. The new project is Captain Forever Trilogy, a re-release of the first three games (Forever, Successor, and Impostor) in glorious full screen, high framerate, GPU accelerated glory. The flash software renderer behind the original games is too slow to run fullscreen, which is why the GFX have been redone in this mode. They looks a little different, but I still like ’em. 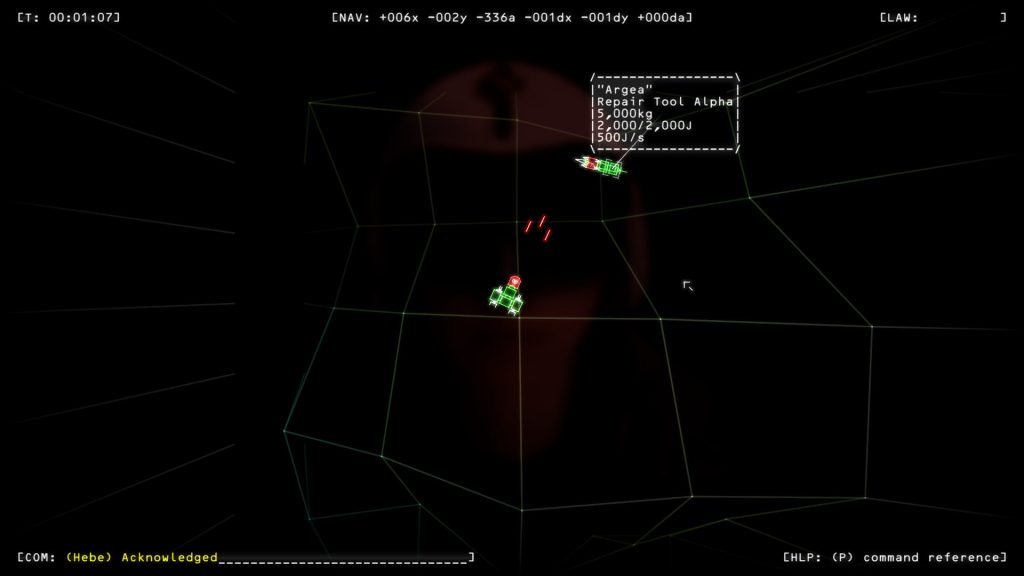 Tonight I’m working on the ?????????? part which unlocks after you complete the three games, then it’s on to options menus, polish, packaging, and release. Woo!

Speaking of release… I haven’t figured out how to do that yet. These days a downloadable game is either Minecraft, on Steam, or dead in the water. So I’ll aim for Steam. But even then, I can’t just leave the supporter program running and give out steam keys to all new supporters. If you do that people buy copies with stolen credit cards, sell the keys on G2A or similar, and leave it up to the real card holder to reverse the transaction. I’d not only lose a sale, but I could end up paying a fee for credit card chargebacks. Multiply this by a few thousand and you can see why it’s not my preferred option. This is why we can’t have nice things. It’s also why my options are limited to: 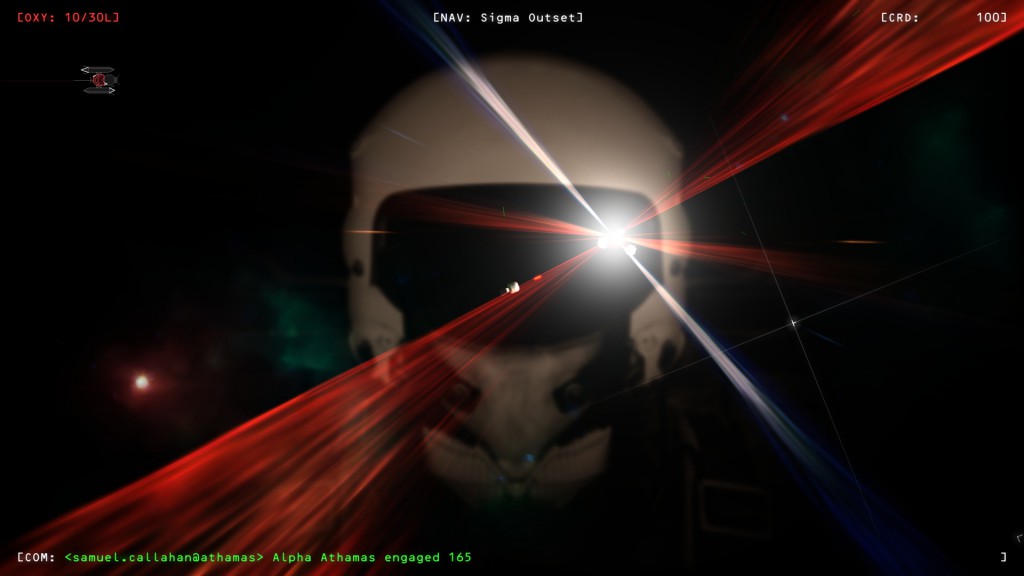 My, what a snazzy new helmet. The pilot’s reflection is only really visible when lit by something particularly bright, which is all the excuse I needed to show off the new explosion effect. It’s not subtle.

I also ported the ping effect to GPU, but though my experiments with integrating it into the vertices of the background geometry looked cool, they failed to express “communication wavefront”. So it’s just a circle again now. I then found success with the new road renderer, which shows transit routes as dashed lines on your HUD. These look quite nice as they wind along ahead of you, and they add a lot of structure to the environment.

Oh, and I finally fixed the bug that causes a camera jump whenever modules are added to or removed from your ship. That took me, what, six years? Anyhow, the scrolling adjusts smoothly now. So that’s nice.

A long standing issue with Captain Forever is that the ships themselves – especially player ships – look like what an old workmate would call “blobs of multicoloured puke”. So that’s not great. In The Dawn Star I’m toning the module colours down, indicating module level on small decals* rather than across the whole sprite. Of course that makes the module level much harder to discern, so what’s a pilot to do?

Why, they just click on a module of course! Then this happens: 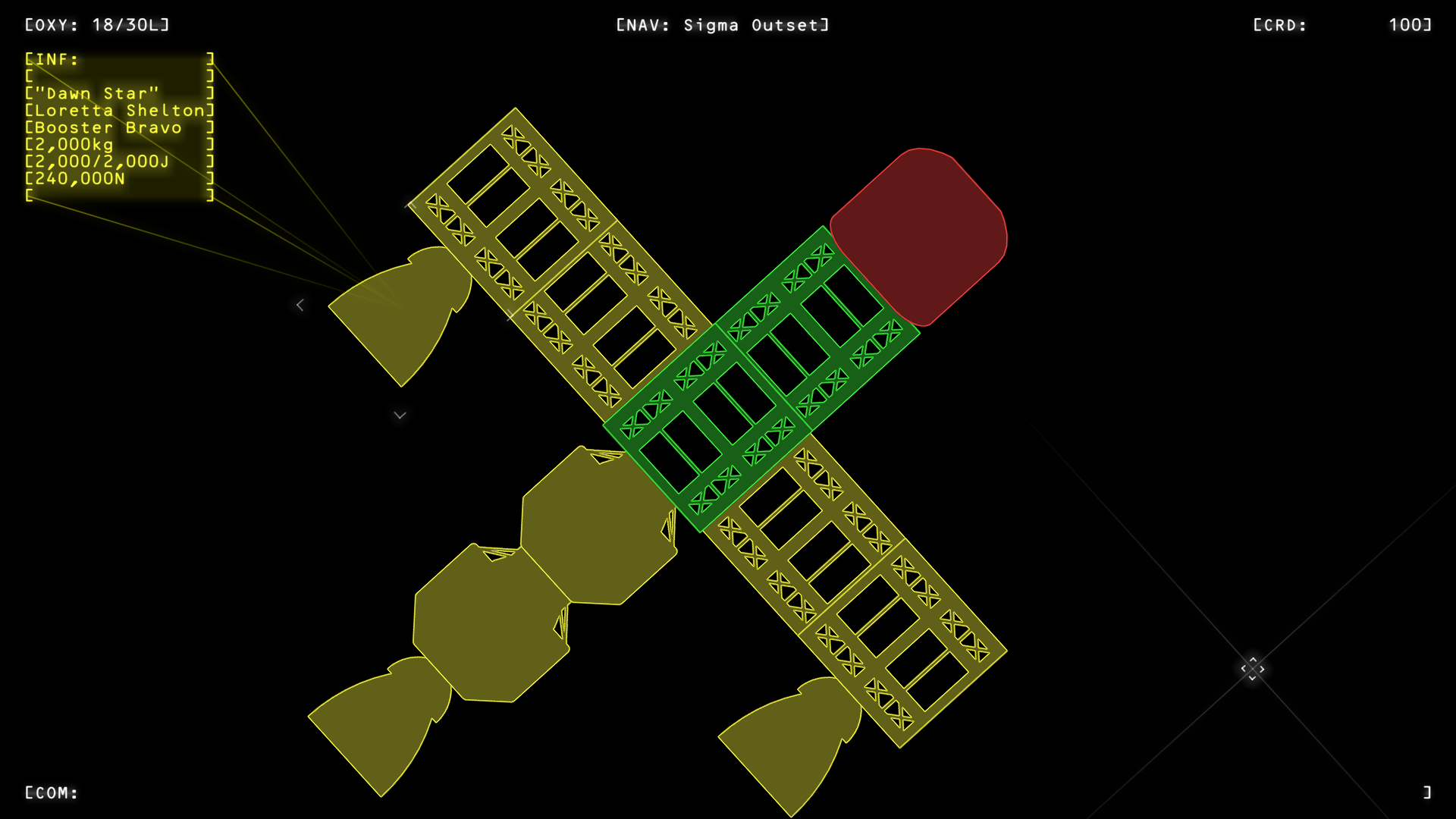 Neat! In this mode module shapes and levels are clearly visible, and building is super easy. Once you’re finished building you simply hit the thrusters (or any other key) and… 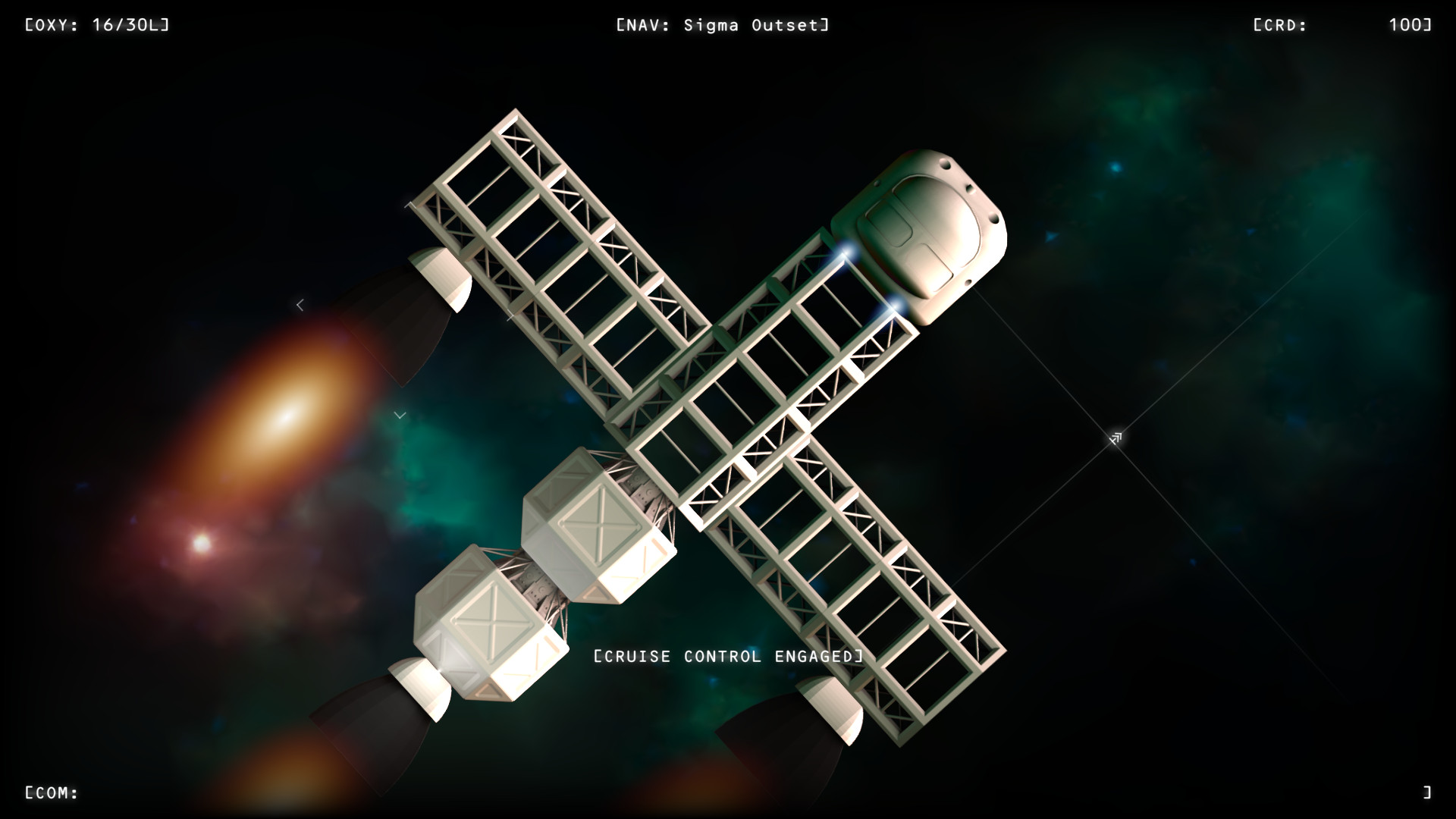 *I haven’t added these yet.