I made a game! This statement is true where “I” is defined as me, John Martz, and Big Giant Circles. Persons rejecting this definition might like to know that a game was made by group of people, of which I am a member. That game is Cumulo Nimblers.

Grab Cumulo Nimblers from the Games page, or follow the jump to read about its development and play some early online builds. 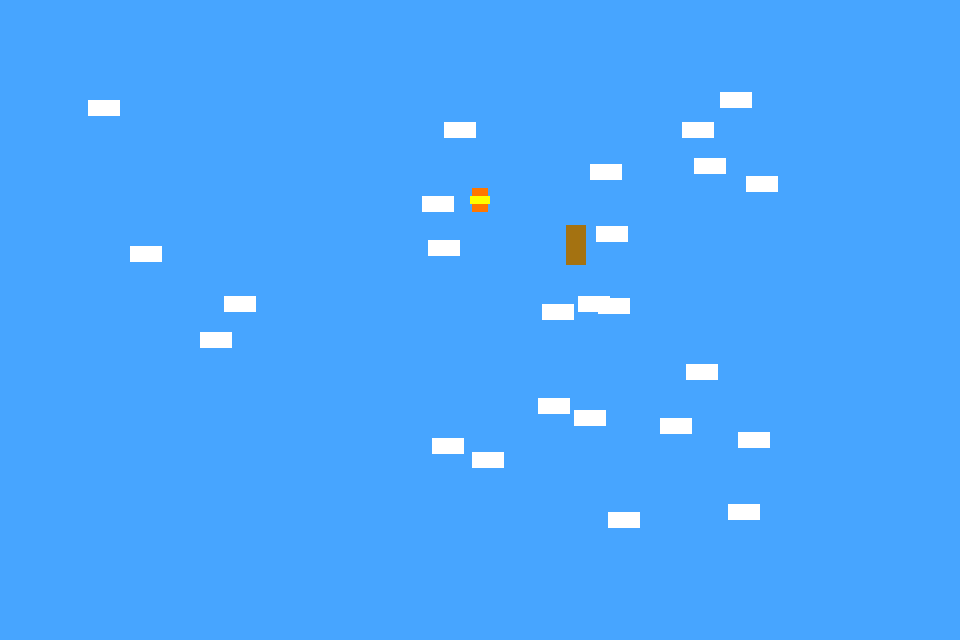 Lots of great games come from developers working in pairs. When Miguel put a call out for developers to pair with comic artists (Comics vs Games) I figured I’d try this collaborative malarkey out. I was also keen to experiment with Haxe, and needed a small project to try it out on.

Miguel set me up with John, and we started throwing ideas around on shared documents. I felt we wouldn’t make much ground ’till we could play something, so I mocked up a quick boxy prototype. Since Haxe can target flash I just chucked it up on the web, and you can play it by clicking the screenshot on the left.

I tend to use boxes for gameplay prototypes as nearly every renderer can draw one with a single line of code, and they can be quite expressive. 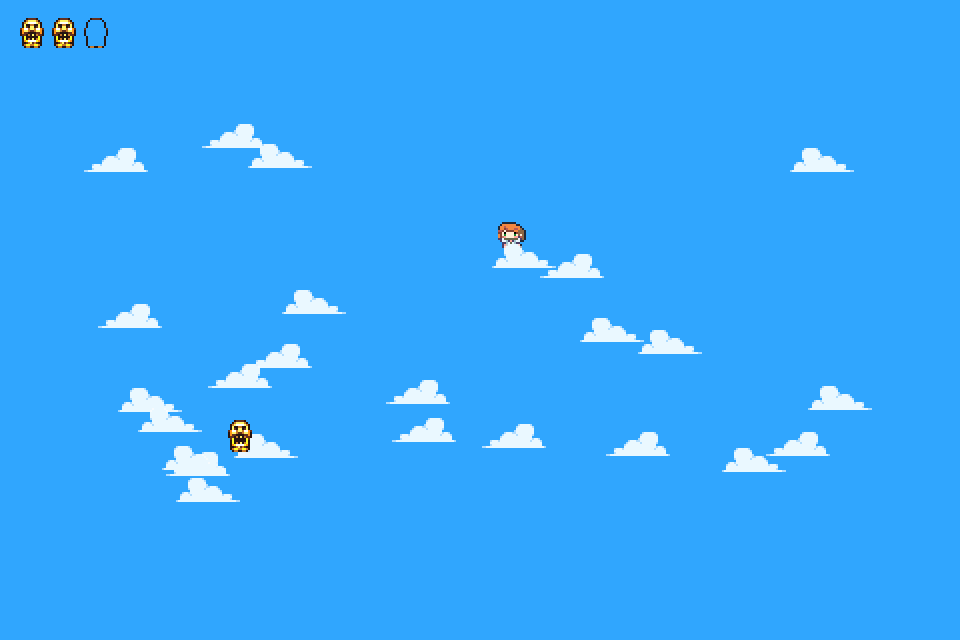 John liked the core ideas of the prototype, so we iterated the design a little for this next build. Since the clouds moved only a small distance it possible to “surf” one around the screen, which was cool but made the game a bit tedious. Instead the clouds now jumped to random screen locations, which sped things up and made route planning and cloud management more important. Other values were tweaked, and we made the character jump on touching clouds rather than landing on them, which sped the game up further.

I also built and tested a quick tile rendering system, which is shown here with test sprites shamelessly ripped from Ciellus and Spelunky. 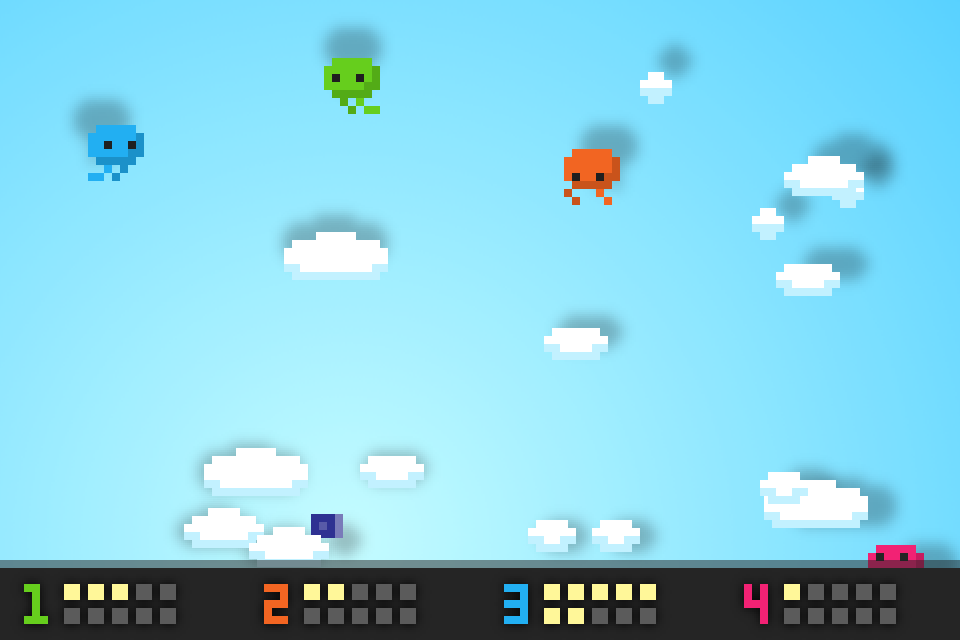 John’s art arrived, and the characters and clouds were larger than I’d expected. I freaked out. Eventually I calmed down and decided to add them to the game anyway, just to see what would happen. With a few balance tweaks it played fine, and some day I’ll learn not to freak out about changes. Some day.

Worried that it might look a bit flat, and that pixel art might be a turnoff for some folk, I played around with lighting and shadow effects. 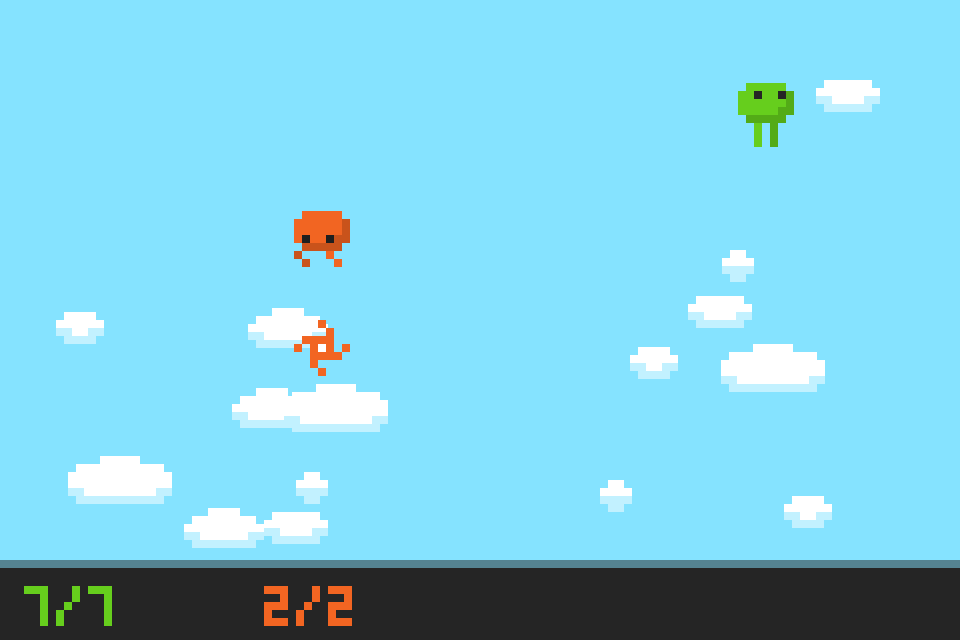 The lighting was not a big hit, as weren’t the shadows :)

We’d planned from the start for CN to have a series of game modes, with the core game being slightly different in each one. On collecting a MacGuffin the mode would change, and you’d suddenly stop dodging meteors and start falling with inverted gravity. It’d be a single player game, and extra players could join in without substantially changing the gameplay. I was also hoping to release on iOS, since Haxe can target it quite easily. With time running out we realised we couldn’t add all these modes in any reasonable way, so I started experimenting with other single player challenges. This build uses AI cloppers to ratchet up the difficulty as you play.

Oh, we also futzed around with the UI a bit before returning to the original concept. I thought 10 MacGuffins was too low a target, so I tried using digits to display the score. It turned out most people struggled to collect 5, so the original UI concept worked fine.

With deadlines approaching we switched focus back to multiplayer, since that’s how the game would be presented at Comics vs Games. In multiplayer the core game was already quite frantic, so we decided to stop adding features and focus our efforts on polish. A barrage of particle systems and sound effects, and an intro screens and last minute scale change later the game was done, and we sent it off to be exhibited.

I couldn’t attend Comics vs Games, so it wasn’t until the Attract Mode party at PAX that I finally saw the game out in the wild. It was great to see people enjoying it, and I realised that I’d never have time for a fully featured commercial version, and that I should release what we had for the world to enjoy.

At this point the game had no “win” condition, so you could keep collecting MacGuffins for as long as you felt like playing. Unfortunately (?) this turned out to be a rather long time, so few people actually got a chance to play. Eventually I had to accept that yes, the game did need an end, and so on coming home after PAX I relented and added one. Now, on collecting sufficient MacGuffins, your clopper explodes in an exciting rainbowsplosion. Again, it was a large design change which others had suggested but I’d pushed back against.

So, Cumulo Nimblers is joyous and fun, and unlike anything I’ve ever made by myself. I’m very happy with it. I’m also glad I experimented with Haxe, and I intend to use it for future projects. Finally, I learned that successful collaboration involves knowing when to stop arguing and just try something. I still have no idea when that should be, but hey it’s a start.

Now, if you haven’t already, grab Cumulo Nimblers from the games page and get hopping!