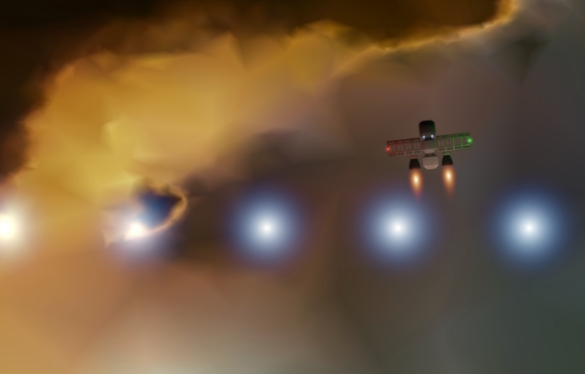 Woo, colourful! These screenshots show off the evolution of The Dawn Star’s emissive rendering. The first shot shows little red and green blobs representing the ship’s running lights. You can also see a big row of blobs that are actually placeholder lane markers for the new road system. Did I mention there are roads now? They’re cool, but they could be a lot prettier. I’ll fix that. Anyhow, this blob rendering system has been quite handy! I discovered I could warp the blobs to create a nice thruster effect – shown blasting out the main boosters and also in little blue jets from the command module. The warping effect creates a teardrop shape, and looks really great in motion as the exhaust flames flicker around. I also discovered I could stretch these blobs in a completely different way to create laser bolts, and that’s exactly what I’ve done here. Fun! 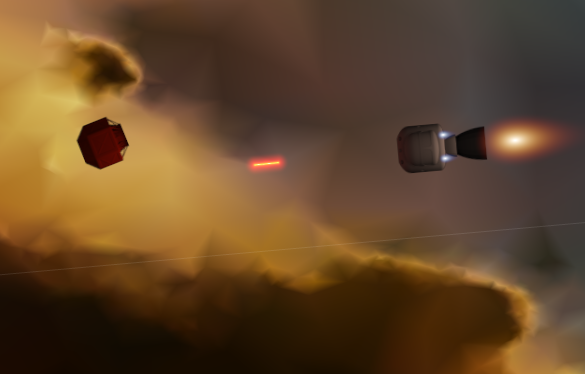 Dynamic lights! There is no ambient light in these images, just light from the thrusters, laser bolt, and running lights. The Dawn Star was built to handle a ton of dynamic lights, and it’s super exciting to see these in action.

There’s a new command module! I don’t much like this direction though and plan to scrap it and try again.

It’s a standalone game now! Okay maybe you can’t see that in these images, but it’s still true. I’ve ported The Dawn Star to AIR, which means it now runs outside the browser just like a regular game. It also runs on more systems and at a much higher framerate.

It’s great to be back on this and making progress again. Next I’ll add GPU-based font rendering using Signed Distance Fields, which should be fun. After that I’m considering a complete UI overhaul – more on that later!

11 Comments » for Fun With Emissives